– Three small bites of the oatmeal I gestured to and made monkey sounds at until my mom made it. The rest of it is currently in the sink.

– Six Tic Tacs that mommy gave me so that I’d be quiet during an episode of Orphan Black.

– Half of a string cheese.

– The scent of one banana.

– What may have been a raisin.

– The liquid from a baby wipe (sucked it out while she was in the bathroom).

– 3-4 pieces of hardened debris from last night’s dinner. Found it in my highchair.

– Half of a bread crust found in the trash

– A bunch of halved grapes

– More couch snacks. I think it was an apple chip.

– The dust between buttons on the remote

– One pump of lotion

– 6 gallons of my own bath water 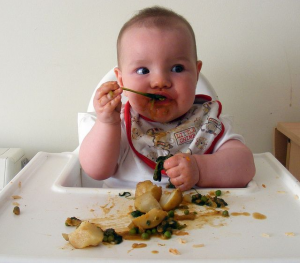 Rants, letters, and stories about motherhood.

Hilarious book for parents of toddlers.